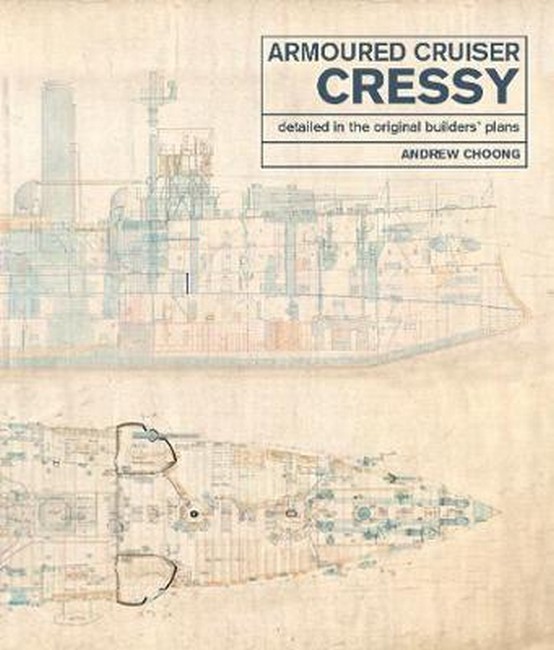 Detailed in the Original Builders' Plans by Choong, Andrew Code: 58980 Format: Hardback / 128 pages Publication date: 10/07/2020 Availability: Future Publication. Pre-order now. Due date: July 2020 Price: AU $85.00
The technical details of British warships were recorded in a set of plans produced by the builders on completion of every ship. Known as the as fitted' general arrangements, these drawings represented the exact appearance and fitting of the ship as it entered service. Intended to provide a permanent reference for the Admiralty and the dockyards, these highly detailed plans were drawn with exquisite skill in multi-coloured inks and washes that represent the acme of the draughtsman's art. Today they form part of the incomparable collection of the National Maritime Museum at Greenwich, which is using the latest scanning technology to make digital copies of the highest quality. This book is one of a series based entirely on these draughts which depict famous warships in an unprecedented degree of detail - complete sets in full colour, with many close-ups and enlargements that make every aspect clear and comprehensible. Extensive captions point the reader to important features to be found in the plans, and an introduction covers the background to the design. The subject of this volume is best known for the disaster of 22 September 1914 in which Cressy and two sister-ships, Aboukir and Hogue, were sunk with great loss of life by a single small submarine in little more than an hour. Having been overtaken by the rapid advance of naval technology in the fifteen years since their construction, the cruisers were regarded as obsolete and employed on a task for which they were never intended. However, in their day they were powerful and innovative ships, with a significant impact on the way the armoured cruiser developed. This becomes clear from the analysis of the plans included in this book, which thus presents an original and more positive view of these ships that will enlighten - and perhaps surprise - many naval historians and enthusiasts. AUTHOR: Andrew Choong is the Curator of Historic Photos and Ships' Plans at the National Maritime Museum's outstation at the Brass Foundry in Woolwich. As such, he is uniquely qualified to select and comment on the draughts in this book. He was also closely involved in the publication of the monumental seven volumes of the Perkins identification series, for which he wrote the introduction. 35 colour plans
Format: Hardback
Pages: 128
Illustration: COLOUR SECTION(S)
Availability: Future Publication. Pre-order now. Due date: July 2020
Publisher: PEN & SWORD BOOKS LTD
Publication date: 10/07/2020
Country of publication: UNITED KINGDOM
Weight: 0 g
Dimensions: 0mm X 0mm
Code: 58980