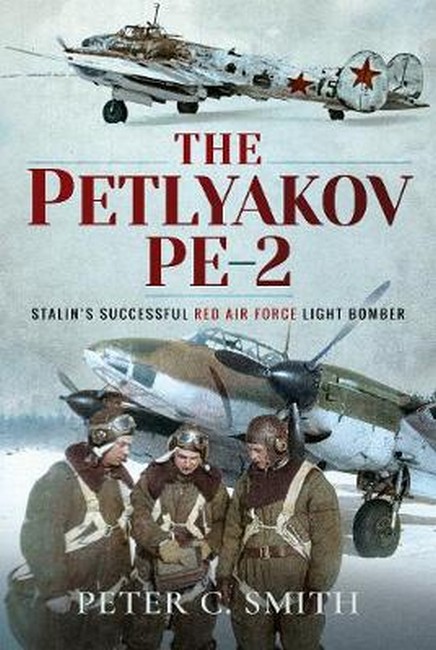 Stalin's Successful Red Air Force Light Bomber by Smith, Peter C Code: 58977 Format: Hardback / 336 pages Publication date: 29/03/2020 Availability: Available. Usually dispatched 1-2 business days Price: AU $85.00
During the Second World War, the Soviet Union's Petlyakov Pe-2 Peshka dive-bomber was unique in that it was as fast as most fighter aircraft. This was in a period when it was considered by the RAF that it was impossible for monoplane aircraft to conduct vertical bombing with any degree of success. During the war the Pe-2 was the principal dive- and light-bomber of Russia's air power across the vast Eastern Front and it continued in service until the early 1950s with the air forces of the Warsaw Pact countries and Yugoslavia. Conceived by a team of top aircraft designers whom Stalin had incarcerated in a prison camp on trumped-up political charges, the Pe-2 had originally been designed as a high-altitude twin-engine fighter plane, but, due to the outstanding success of the German Stukas in the Blitzkrieg, its role was quickly changed to that of a fast dive-bomber. The Pe-2 arrived in service around the time of the German attack on its hitherto ally. Although only a handful had reached front line units by the start of Operation Barbarossa in June 1941, the Pe-2 soon became the main dive-bomber in both the Soviet VVS and Naval service. Mass production, by factories hastily moved back beyond the front, meant that numbers increased rapidly, and more than 11,000 of the type, including many variants, were built up to 1945. The Peshka became the mainstay of the Soviet counter-offensive that ultimately resulted in the fall of Berlin. Pe-2s also led the way in the brief but annihilating Manchurian campaign against Japan in the closing days of the war in 1945. Using official sources, including the official Pe-2 handbook, and numerous colour and black-and-white photographs made available to the author from both official and private sources and collections, this book is the definitive record of the Pe-2 - the dive-bomber supreme! AUTHOR: Peter Charles Horstead Smith was born in Norfolk in 1940. After living in London, Kent and Cambridge he and his wife Pat settled in the small Bedfordshire village of Riseley in 1982 where they currently still reside. Peter is a Member of The Society of Authors, London, and has worked as both a book and a magazine editor but has been a full-time historian and author since 1968. Peter is best known for his eighty-six meticulously researched factual history books on aviation, military and naval topics. 400 b/w illustrations
Format: Hardback
Pages: 336
Illustration: B&W THROUGHOUT
Availability: Available. Usually dispatched 1-2 business days
Publisher: PEN & SWORD BOOKS LTD
Publication date: 29/03/2020
Country of publication: UNITED KINGDOM
Weight: 0 g
Dimensions: 234.00mm X 156.00mm
Code: 58977