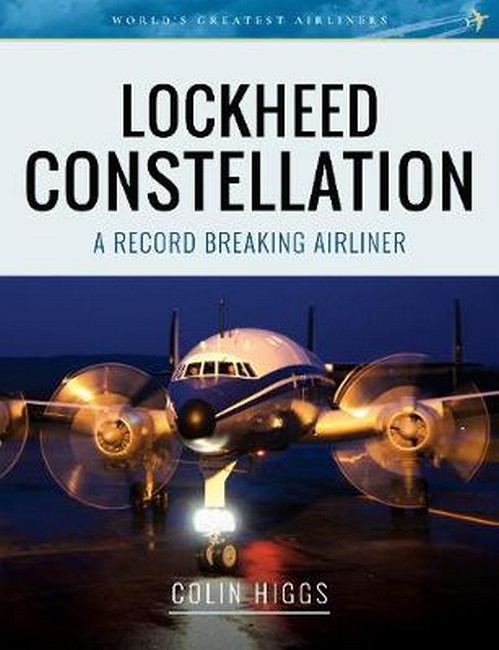 A Record Breaking Airliner by Higgs, Colin Code: 56591 Format: Paperback / 176 pages Publication date: 01/03/2022 Availability: Pre Order. Release date: March 2022 Price: AU $75.00
It was to be created for one man and one airline but became one of the best and most elegant aircraft ever to grace the skies. Howard Hughes was one of the wealthiest people in the world. He bought control in TWA, the huge American airline, and wanted to make it special. He wanted an aircraft that would give TWA the edge and begin the country's first ever coast-to-coast service carrying twenty passengers and freight. In fact he wanted a lot of them. Hughes discussed it with Lockheed, one of the smaller aviation companies in the USA, but they had grander plans. What they built was the Constellation, one of the greatest airliners of all time. Lockheed Constellation tells the story of the aircraft that was used by more than 100 airlines and air forces in thirty-eight countries; an airliner that came to epitomise the grand and romantic age of flight in the post-war years before the jet engine ruled. It tells of the wartime development which made the USAAF buy the first few aircraft off the production line; the post-war development which would see nine variants built; of the great airlines around the globe that would make the Constellation their first choice flagships; of the amazing technological advances made during development; and of the enduring legacy of this unique aircraft.
Format: Paperback
Pages: 176
Illustration: B&W THROUGHOUT
Availability: Pre Order. Release date: March 2022
Publisher: PEN & SWORD BOOKS LTD
Publication date: 01/03/2022
Country of publication: UNITED KINGDOM
Weight: 0 g
Dimensions: 246.00mm X 189.00mm
Code: 56591