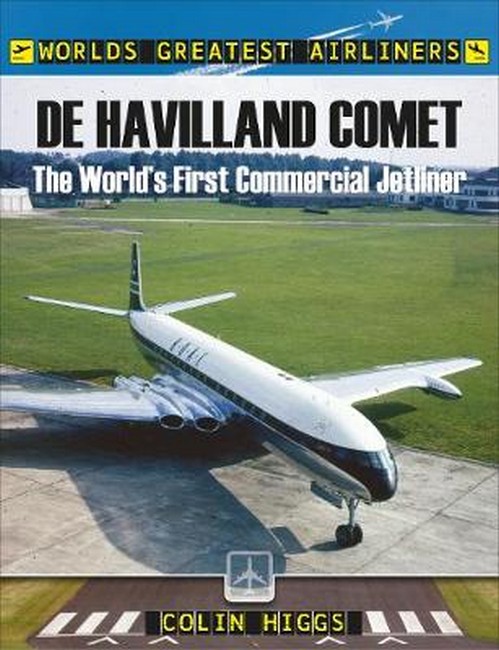 The World's First Commercial Jetliner by Higgs, Colin Code: 56491 Format: Paperback / 152 pages Publication date: 01/02/2018 Availability: Available. Usually dispatched from UK 1-2 business days Price: AU $32.57
The world got a little smaller in July 1949 when the first jet-powered airliner took to the skies barely four years after the end of the Second World War. Not only was the de Havilland Comet 1 was a lot faster than previous airliners, it could fly higher and further. It was packed with new technology but, perhaps most importantly for those early passengers, it was a quiet, luxurious and even pleasant experience, something that could never be said for the noisy piston-engine aircraft that came before. The Comet s leadership in jet travel for the future was assured until aircraft began crashing. The first ones were put down to pilot error but two disastrous events in 1954 grounded the fleet and Britain s advantage over the rest of the world was lost. Boeing caught up with its ubiquitous 707 and the Comet was destined to become but a memory. However, rising from the ashes came a new Comet one that was bigger and more powerful than before and designed for completely different roles. Where the first Comets had provided an expensive and plush way to travel for the rich few, the new Comet 4s carried more passengers to a multitude of destinations inevitably becoming key carriers for the early package holidaymakers. At the same time they became vital strategic transports for the RAF as the British Empire receded. This book tells the full story of the world s first jet-powered airliner, from its remarkable beginnings, through its early flight trials programme to its entry into service. The type s military career is also covered, as is its construction; also included in this volume are details of the numerous variants produced and those still surviving as exhibits today. There are also twenty-four superb artworks by world-renowned aviation illustrator Juanita Franzi.
Format: Paperback
Pages: 152
Illustration: B&W THROUGHOUT
Availability: Available. Usually dispatched from UK 1-2 business days
Publisher:
Publication date: 01/02/2018
Country of publication: UNITED KINGDOM
Weight: 0 g
Dimensions: 246mm X 189mm
Code: 56491