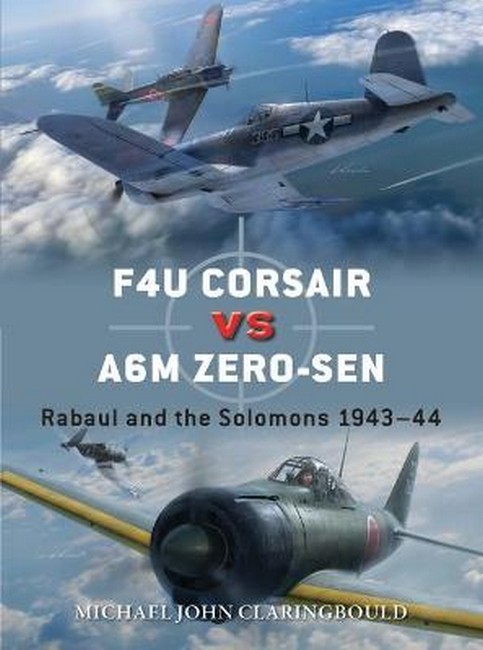 Rabaul and the Solomons 1943-44 by Claringbould, Michael John Code: 61551 Format: Paperback / 80 pages / 5 mins Publication date: 07/03/2022 Availability: In stock at supplier. Usually dispatched 3-7 business days Price: AU $34.95
The aerial clashes between the iconic Corsair and Zero-sen translated into a contest of speed and altitude for the former, versus the latter's outstanding agility and range. Whilst the F4U Corsair eventually proved to be a superior fighter in Pacific operations, its introduction into combat in this theatre initially demonstrated its weaknesses. Indeed, the 'Saint Valentine's Day Massacre' debacle showcased exemplary Zero-sen fighter tactics, and American losses were of sufficient magnitude that further daylight missions toward Bougainville were discontinued until Allied fighter tactics could be improved. As a result, for the next two months the Corsair's combat results were much subdued. Indeed, the F4U only became a superb fighter when both its pilots and their commanders worked out how to deploy the gull-wing design effectively. Optimum circumstances for effective engagement did not always occur, and the Zero-sen remained effective against the Corsair until February 1944 in the South Pacific, after which all IJNAF fighter units vacated Rabaul. This book closely examines these two different fighters in the Solomons/Rabaul theatre, and the unique geographic conditions which shaped their deployment and effectiveness. It contains rare photographs and digital artwork that accurately showcases and aligns combats of both types in-theatre with unprecedented accuracy. Both sides vastly over-claimed. With full access to IJNAF and US Navy/US Marine Corps records, these numbers will be presented accurately.
Format: Paperback
Pages: 80
Availability: In stock at supplier. Usually dispatched 3-7 business days
Publisher: OSPREY
Publication date: 07/03/2022
Country of publication: UNITED KINGDOM
Weight: 0 g
Dimensions: 248.00mm X 184.00mm
Code: 61551

Introduction Chronology Design and Development Technical Specifications The Strategic Situation The Combatants Combat Statistics and Analysis Aftermath Further Reading Index To illustrate the unique features of the F4U and A6M5 Model 52 Zero-sen, including armament, cockpit details and basic fighter formations, as well as the location they flew from in-theater. Also included will be an engaging the enemy cockpit artwork and a battlescene spread.