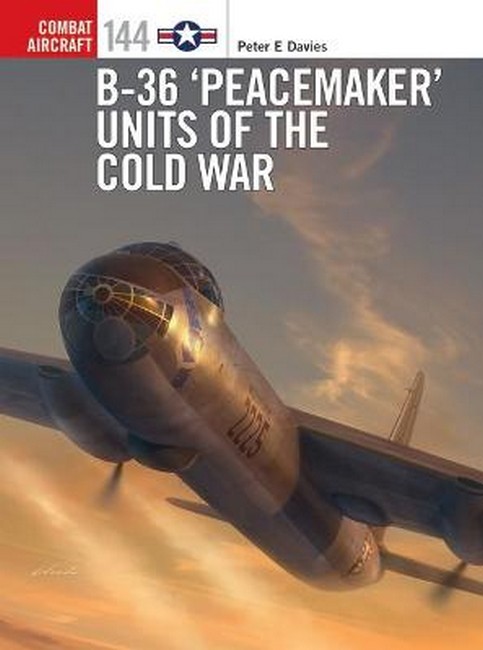 B-36 'Peacemaker' Units of the Cold War

by Davies, Peter E. Code: 61517 Format: Paperback / 96 pages Publication date: 07/03/2022 Availability: In stock at supplier. Usually dispatched 3-7 business days Price: AU $39.95
A fully illustrated study into the extraordinary Convair B-36 during the Cold War. Conceived during 1941 in case Germany occupied Britain, when US bombers would then have insufficient range to retaliate, the B-36 was to be primarily a '10,000-mile bomber' with heavy defensive armament, six engines and a performance that would prevent interception by fighters. Although rapid developments in jet engine and high-speed airframe technology quickly made it obsolescent, the B-36 took part in many important nuclear test programmes. The aircraft also provided the US nuclear deterrent until the faster B-52 became available in 1955. It was one of the first aircraft to use substantial amounts of magnesium in its structure, leading to the bomber's 'Magnesium Overcast' nickname. It earned many superlatives due to the size and complexity of its structure, which used 27 miles of wiring, had a wingspan longer than the Wright brothers' first flight, equivalent engine power to 400 cars, the same internal capacity as three five-room houses and 27,000 gallons of internal fuel - enough to propel a car around the world 18 times. Much was made of the fact that the wing was deep enough to allow engineers to enter it and maintain the engines in flight. B-36s continued in the bomber and reconnaissance role until their retirement in February 1959 following 11 years in SAC. Convair employees were invited to suggest names for the giant aircraft, eliciting suggestions such as 'King Kong Bomber', 'Condor', 'Texan' and 'Unbelievable', but the most popular was 'Peacemaker'. Oddly, objections from religious groups deterred the USAF from ever adopting it officially. This fully illustrated volume includes first-hand accounts, original photographs and up to 30 profile artworks depicting in detail the complexity of this superlative aircraft.
Format: Paperback
Pages: 96
Availability: In stock at supplier. Usually dispatched 3-7 business days
Publisher: OSPREY
Publication date: 07/03/2022
Country of publication: UNITED KINGDOM
Weight: 0 g
Dimensions: 248.00mm X 184.00mm
Code: 61517