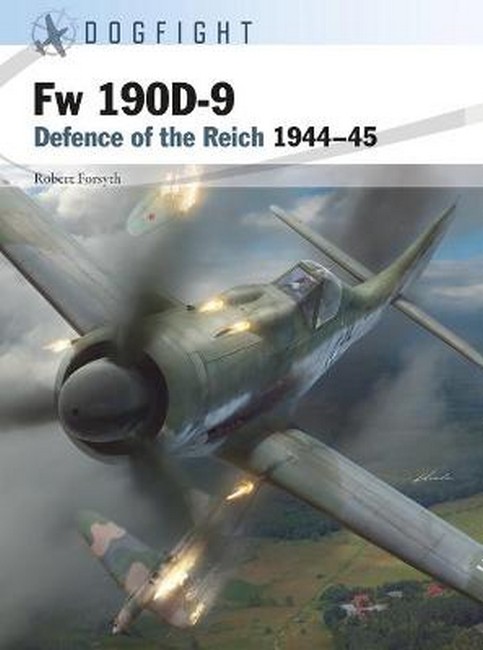 Arguably one of the finest piston-engined fighters ever built, the Focke-Wulf Fw 190D-9 raised the bar in terms of aircraft design and operational capability during World War II. Designed by Kurt Tank, the long-nosed Fw 190D9 Dora bettered most of the fighters that the Allied and Soviet air forces could field when it first appeared in the skies over the Western and Eastern Fronts in 1944. Indeed, with experienced German pilots at the controls it proved to be an immediate match for even the later-mark Griffon Spitfire and the P-51D/K. Well-armed, with two 13mm machine guns and two 20mm cannon, the D-9 began to equip Luftwaffe units from August 1944. Later on in the war, one of the key missions of the D-9 was to provide top cover for Me 262 jet fighters when they were at their most vulnerable during take-off and landing. Featuring first-hand accounts, photographs, artwork and innovative and colourful 3D ribbon diagrams, this fascinating volume portrays what it was like to fly the superlative Fw 190D-9 in combat, providing a realistic insight in to how German pilots used the superb Focke-Wulf aircraft in combat against American, British and Russian fighters in the Defence of the Reich in 1944-45.

Introduction Chapter 1 In Battle An all-action account of III./JG 54 engaging Typhoons or Tempests over western Germany in March 1945 Chapter 2 Setting the Scene Design, development, production, early actions, the Ardennes and Operation Bodenplatte Chapter 3 Path to Combat Charting the careers of two Luftwaffe pilots who flew the D-9 in combat - one, a Knights Cross-holder and ace, the other, a lesser known Dora 9 pilot Chapter 4 Weapon of war A brief technical appraisal of the Fw 190D-9, detailing its development and the weaponry it employed Chapter 5 Art of War Tactics for Fw 190D-9 units were quite loose, as was tactical doctrine by this stage of the war - the key word was survival. This chapter will look at the Split S manoeuvre and the evolution of the Rotte and Schwarm tactical formations Chapter 6 Combat In this chapter, Fw 190D-9 pilots explain what it was like fly the Dora 9 in an aerial engagement against some of the best Allied fighters of World War II such as the Spitfire XIV, P-51D Mustang and Tempest V Conclusion Appendices Index

Robert Forsyth is an author, editor and publisher, specialising in the aircraft, units and operations of the Luftwaffe. He is the author of over 25 titles for Osprey Publishing, including his most recent Luftwaffe Special Weapons. He has written articles for The Aviation Historian, Aerojournal, Aeroplane Monthly, Aviation News, Combat Aircraft, and FlyPast and he is a member of the Editorial Board of The Aviation Historian. Gareth Hector is a digital artist of international standing as well as an aviation history enthusiast. Gareth completed the battlescene and cover artwork in this title. He lives in Perthshire, UK. Tim Brown has worked in publishing since the early 1990s, performing the roles of designer, art director and illustrator during that time. His passion for aviation art dates back to the 1970s, and he has used his considerable experience in this area to create the ribbon diagrams for the Dogfight series. These are a new departure for Osprey, and form the illustrative backbone of these titles. Jim Laurier is a native of New England, growing up in New Hampshire and Massachusetts. He has produced artwork for the Osprey aviation list since 2000, and over the past 20 years he has created some of the finest profile and technical artwork seen in these volumes. He will be responsible for the armament views in the Dogfight series titles.