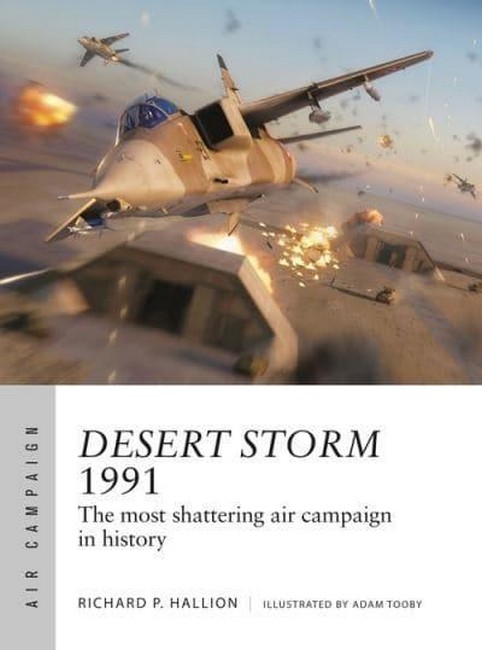 An expertly written, illustrated new analysis of the Desert Storm air campaign fought against Saddam Husseins Iraq, which shattered the worlds fourth-largest army and sixth-largest air force in just 39 days, and revolutionized the worlds ideas about modern air power. Operation Desert Storm took just over six weeks to destroy Saddam Husseins war machine: a 39-day air campaign followed by a four-day ground assault. It shattered what had been the worlds fourth-largest army and sixth-largest air force, and overturned conventional military assumptions about the effectiveness and value of air power. In this book, Richard P. Hallion, one of the worlds foremost experts on air warfare, explains why Desert Storm was a revolutionary victory, a war won with no single climatic battle. Instead, victory came thanks largely to a rigorously planned air campaign. It began with an opening night that smashed Iraqs advanced air defense system, and allowed systematic follow-on strikes to savage its military infrastructure and field capabilities. When the Coalition tanks finally rolled into Iraq, it was less an assault than an occupation. The rapid victory in Desert Storm, which surprised many observers, led to widespread military reform as the world saw the new capabilities of precision air power, and it ushered in todays era of high-tech air warfare.

Richard P. Hallion holds a Ph.D. in history from the University of Maryland, and has completed specialized governmental and national security programs at the Federal Executive Institute, and the John F. Kennedy School of Government. In a long and distinguished career he has been a Curator at the Smithsonian Institutions National Air and Space Museum; the Harold Keith Johnson Chair of Military History at the Army War College; the Charles Lindbergh Professor at the National Air and Space Museum; and The Air Force Historian. He is a Fellow of the American Institute of Aeronautics and Astronautics, the Royal Aeronautical Society, and the Royal Historical Society.