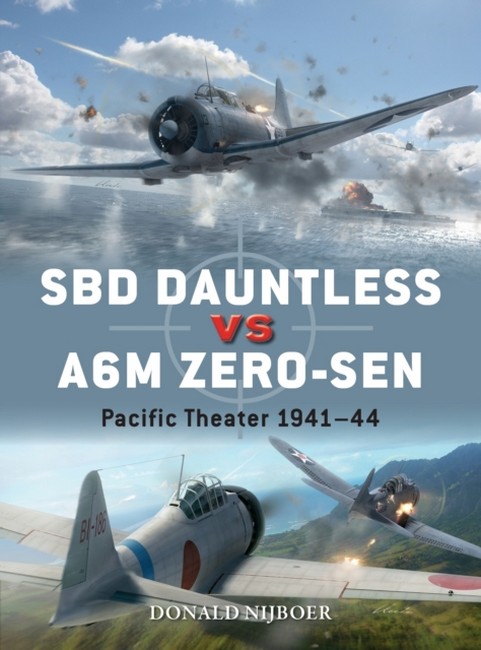 The SBD Dauntless dive-bomber was a key cog in the US Navys aerial arsenal throughout the Pacific War. Although a product of aviation design in the mid to late 1930s, the type soldiered on even as more advanced aircraft were appearing from American factories as the war progressed. Despite its classification as a dive-bomber and rather dated appearance, the SBD Dauntless could more than handle its own against the feared A6M Zero-sen - a regular opponent, especially during the first 18 months of the campaign in the Pacific. The SBD was credited with 138 victories in aerial combat (principally in 1942), 107 of which were fighters and the rest bombers. Seven SBD units claimed five or more aerial victories, with future ace Lt(jg) John Leppla of VS-2 being credited with four victories while flying from the carrier USS Lexington during the Battle of the Coral Sea in May 1942. The Zero-sen came to symbolise Japans military prowess during the early stages of the war in the Pacific, and it quickly became the worlds premier carrier-based fighter - a title it would hold well into 1943. The psychological impact of the Zero-sen was so great that all Allied fighters were judged by the standards set by it. The aviators flying the A6M in 1941-42 were amongst the most experienced fighter pilots in the world, and they claimed a significant number of the SBDs destroyed while trying to defend their carriers from attack during the Battles of Coral Sea, Midway and Santa Cruz in 1942. While one was a dive-bomber and the other a nimble fighter, both met in combat many times, with the Dauntless proving an elusive and deadly target thanks to the tenacity and skill of the pilots and gunners manning the Douglas aircraft. While the Zero-sen was credited with shooting down many SBDs, the rugged dive-bomber gave as good as it got and emerged, not surprisingly, victorious on many occasions. This book examines these aircraft in detail, exploring their history and development and contains accurate descriptions of the combats between the SBD Dauntless and Zero-sen throughout the first four carrier battles of 1942 and the Solomons Campaign.

Donald Nijboer is a best-selling aviation author, historian, documentary writer-producer and Smithsonian Speaker who lives in Toronto, Canada. Donald is the author of seven books for Osprey in the Duel and Aviation Elite Units series, and he has also written a handful of other books for publishers in North America. Currently, he is writing and producing full-length aviation documentaries for the on-line broadcaster Aerocinema.com. He has also written articles for Flight Journal, Aviation History and Aeroplane Monthly.