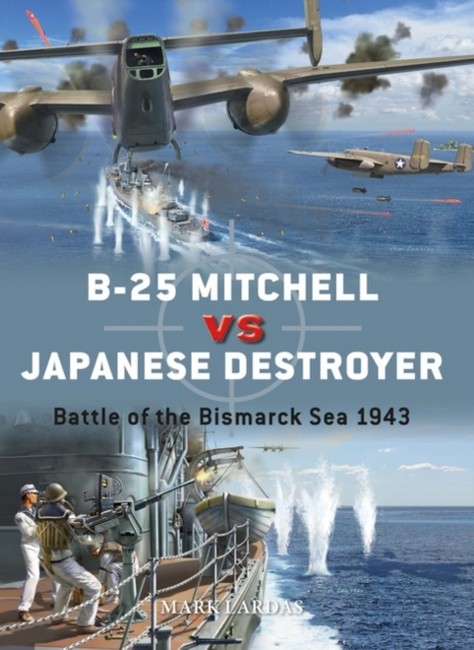 B-25 Mitchell vs Japanese Destroyer

Throughout the first year of the war in the Pacific during World War II the USAAF was relatively ineffective against ships. Indeed, warships in particular proved to be too elusive for conventional medium-level bombing. High-level attacks wasted bombs, and torpedo attacks required extensive training. But as 1942 closed, the Fifth Air Force developed new weapons and new tactics that were not just effective, they were deadly. A maintenance officer assigned to a B-25 unit found a way to fill the bombardiers position with four 0.50-cal machine guns and strap an additional four 0.50s to the sides of the bomber, firing forward. Additionally, skip-bombing was developed. This called for mast-top height approaches flying the length of the target ship. If the bombs missed the target, they exploded in the water close enough to crush the sides. The technique worked perfectly when paired with "strafe" B-25s. Over the first two months of 1943, squadrons perfected these tactics. Then, in early March, Japan tried to reinforce their garrison in Lae, New Guinea, with a 16-ship convoy - eight transports guarded by eight destroyers. The Fifth Air Force pounced on the convoy in the Bismarck Sea. By March 5 all eight transports and four destroyers had been sunk This volume examines the mechanics of skip-bombing combined with a strafing B-25, assessing the strengths and weaknesses of the combatants (B-25 versus destroyer), and revealing the results of the attacks and the reasons why these USAAF tactics were so successful.

Mark Lardas, educated as a naval architect, worked for more than 30 years as an engineer, space navigator and technical writer in the space, aviation and energy industries. He has an abiding interest in aerospace, maritime, naval, and military history, with an emphasis on ship construction and engineering from the ninth to the twenty-first centuries. He is the author of more than 24 published books on these subjects. Mark lives and works in League City, Texas. Jim Laurier is a native of New England and lives in New Hampshire. He attended Paier School of Art in Hamden, Connecticut, from 1974-78, and since graduating with Honours, he has been working professionally in the field of Fine Art and Illustration. He has been commissioned to paint for the US Air Force and has aviation paintings on permanent display at the Pentagon. Gareth Hector is a digital artist of international standing as well as an aviation history enthusiast. Gareth completed the battlescene and cover artwork in this title. He lives in Perthshire, UK.