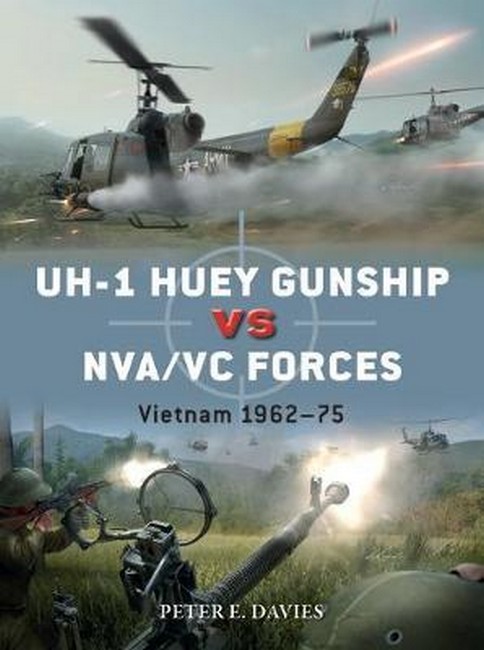 Vietnam 1962-75 by Davies, Peter E. Code: 60626 Format: Paperback / 80 pages Publication date: 12/08/2021 Availability: In stock at supplier. Usually dispatched 3-7 business days Price: AU $29.99
Often described as the US Army's aerial jeep the UH-1 Iroquois ('Huey') was the general-purpose vehicle that provided mobility in a hostile jungle environment which made rapid troop movement extremely challenging by any other means. Hueys airlifted troops, evacuated casualties, rescued downed pilots, transported cargo externally and enabled rapid transit of commanders in the field. Although 'vertical aviation' had only become a practical reality during the Korean War helicopters evolved rapidly in the decade before Vietnam and by 1965 the US Army and US Marines relied on them as primary combat tools. This was principally because North Vietnam's armed forces had long experience of jungle operations, camouflage and evasion. Generally avoiding set-piece pitched battles they relied on rapid, frequent strikes and withdrew using routes that were generally inaccessible to US vehicles. They commonly relied on darkness and bad weather to make their moves, often rendering them immune to conventional air attack. Gunship helicopters, sometimes equipped with Firefly searchlights and early night vision light intensifiers, were more able to track and attack the enemy. Innovative tactics were required for this unfamiliar combat scenario and for a US Army that was more prepared for conventional operations in a European-type setting. One of the most valuable new initiatives was the UH-1C 'Huey Hog' or 'Frog' gunship, conceived in 1960 and offering more power and agility than the UH-1B that pioneered gunship use in combat. Heavily armed with guns and rockets and easily transportable by air these helicopters became available in large numbers and they became a major problem for the insurgent forces throughout the war. Covering fascinating details of the innovations in tactics and combat introduced by gunship helicopters, this book offers an analysis of their adaptability and usefulness in a variety of operations, while exploring the insurgent forces' responses to the advent of 'vertical aviation'.
Format: Paperback
Pages: 80
Availability: In stock at supplier. Usually dispatched 3-7 business days
Publisher: OSPREY
Publication date: 12/08/2021
Country of publication: UNITED KINGDOM
Weight: 0 g
Dimensions: 248.00mm X 184.00mm
Code: 60626