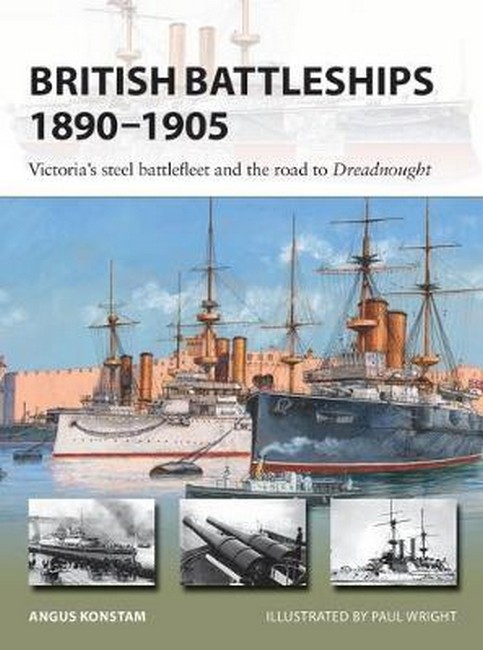 Victoria's steel battlefleet and the road to Dreadnought by Konstam, Angus Code: 60201 Format: Paperback / 48 pages Publication date: 25/02/2021 Availability: Available. Usually dispatched 1-3 business days Price: AU $23.98
The term 'pre-dreadnought' was applied in retrospect, to describe the capital ships built during the decade and a half before the launch of HMS Dreadnought in 1906. At that moment these once great warships were rendered obsolete. However, until then, they were simply called 'battleships' and were unquestionably the most powerful warships of their day. These mighty warships represented the cutting edge of naval technology. The ugly ducklings of the ironclad era had been transformed into beautiful swans, albeit deadly ones. In Britain, this period was dominated by Sir William White, the Navy's Chief Constructor. Under his guidance the mastless battleships of the 1880s gave way to an altogether more elegant type of capital ship. The period of trial and error which marked the ironclad era ushered in a more scientific style of naval architecture. As a result, these battleships were among the most powerful warships in the world during the late Victorian era, and set a benchmark for the new battle fleets produced by navies such as Japan, Russia and the United States. Illustrated throughout with full-colour artwork, this fascinating study offers a detailed and definitive guide to the design, development and legacy of the Royal Navy's battleships at the turn of the 20th century as they paved the way for the coming of the Dreadnought.
Format: Paperback
Pages: 48
Illustration: COLOUR SECTION(S)
Availability: Available. Usually dispatched 1-3 business days
Publisher: OSPREY
Publication date: 25/02/2021
Country of publication: UNITED KINGDOM
Weight: 168 g
Dimensions: 248.00mm X 184.00mm
Code: 60201