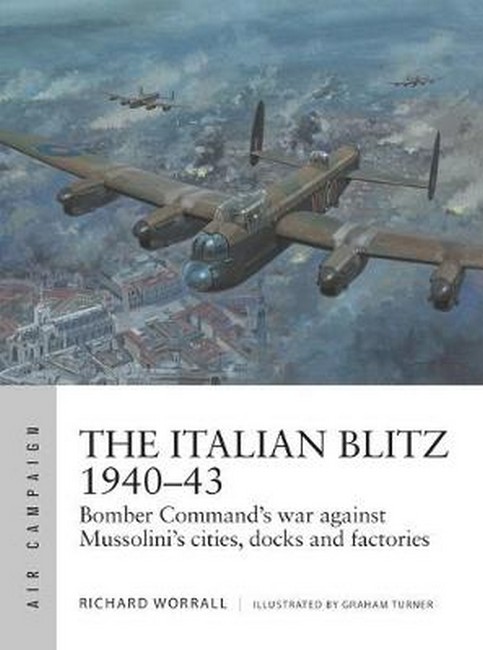 Between June 1940 and August 1943, RAF Bomber Command undertook a little-known strategic bombing campaign in Europe. The target was Mussolinis Italy. This air campaign was a key part of the strategic policy of Britain from 1940 to 1943, which aimed at securing Italys early surrender. However, it posed unique challenges, not least of which was Italys natural defences of distance and the Alps. The bombing campaign against Italy can be divided into a number of phases, with each one having its own specific goals such as affecting Italian war production or hindering the Italian Navys war in the Mediterranean. However, each also furthered the ultimate aim of forcing Italys final capitulation, demonstrating that the tactic of area-bombing was not just about the destruction of an enemys cities, as it could also fulfil wider strategic and political objectives. Indeed, the intensity and frequency of attack was greatly controlled, and the heavy bombing of Italy was only ever sanctioned by Britains civilian war leaders to achieve both military and political goals. The issue of target-selection was also subject to a similar political restriction; cities and ports like Milan, Turin, Genoa and La Spezia were sanctioned under an official Directive, but other places, such as Verona, Venice, Florence and, above all, Rome, remained off-limits. This fascinating title from British strategic and military history expert Dr Richard Worrall explores the political, motivational and strategic challenges of the campaign in full. His thorough analysis and meticulous research is supported by specially commissioned artwork, maps, and contemporary photographs.

Dr Richard Worrall teaches at the Department of History, Politics & Philosophy at Manchester Metropolitan University, and has taught history for over ten years, most recently in Singapore, and previously at the London School of Economics and Manchester Metropolitan University. His PhD from the University of Oxford focused on British strategic and military history, and he also holds an MA in Imperial and Commonwealth History from Kings College London, and a BSc in International History from the LSE. Graham Turner is a leading historical artist, specializing in the medieval period. He has illustrated numerous titles for Osprey, covering a wide variety of subjects from the dress of the 10th-century armies of the Caliphates, through the action of bloody medieval battles, to the daily life of the British Redcoat of the late 18th century. The son of the illustrator Michael Turner, Graham lives and works in Buckinghamshire, UK.