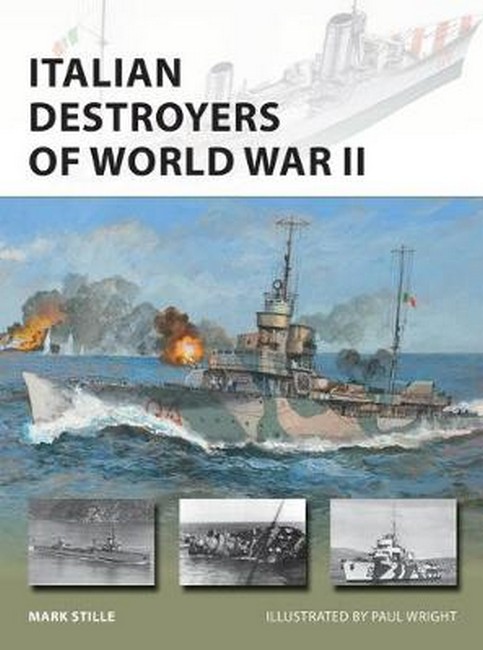 by Stille, Mark Code: 60472 Format: Paperback / 48 pages Publication date: 10/03/2021 Availability: Available. Usually dispatched 1-3 business days Price: AU $29.99
The Italian Royal Navy (Regia Marine or RM) began the Second World War with one of the largest fleets in the world. Included in this was a total of 59 fleet destroyers, and others were added during the war. These were a diverse collection of ships dating back to the First World War, large destroyers built to counter ships of similar size being introduced in the French Navy (the RM's historical enemy), and medium-sized ships which constituted the bulk of the destroyer force. RM destroyers were built for high speed, not endurance since they were only expected to operate inside the Mediterranean. They were also well-armed, but lacked radar. During the war, RM destroyers fought well. With the exception of a small force based in Abyssinia which fought a series of battles in the Red Sea against the British, RM destroyers were active in the Mediterranean. The primary mission of the RM curing the war was to keep the supply lines to North Africa open. The Italians were largely successful in this effort, and destroyers were key in the effort. RM destroyers were present at every fleet action with the British Mediterranean Fleet.. The intensity of these actions were shown by the fact that the RM lost 51 destroyers during the war.
Format: Paperback
Pages: 48
Illustration: COLOUR SECTION(S)
Availability: Available. Usually dispatched 1-3 business days
Publisher: OSPREY
Publication date: 10/03/2021
Country of publication: UNITED KINGDOM
Weight: 0 g
Dimensions: 248.00mm X 184.00mm
Code: 60472