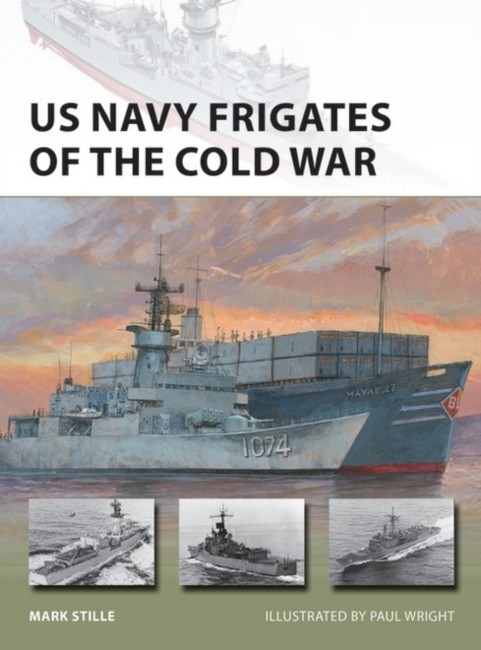 US Navy Frigates of the Cold War

by Stille, Mark Code: 60616 Format: Paperback / 48 pages Publication date: 16/06/2021 Availability: Available. Usually dispatched 1-3 business days Price: AU $22.99
Though they were never the most glamorous of warships, found US Navy frigates were frequently found on the frontlines of the Cold War at sea. These warships were the descendants of World War II's destroyer escorts, designed primarily to escort convoys. They specialized in anti-submarine warfare, but were intended to be numerous, tough, versatile, and well-armed enough to show US naval power around the world, performing roles that varied from intercepting drug-smugglers to defending aircraft carriers. When the Cold War turned hot, frigates were often there. It was a US Navy frigate, Harold E. Holt, that conducted the US Navy's first hostile boarding action since 1826 during the SS Mayaguez incident. Frigates were at the forefront of operations in the Persian Gulf during the Tanker War, with the frigate USS Stark suffering a notorious Exocet attack by Iraqi warplanes, and proving the Oliver Hazard Perry-class's legendary toughness. This book explains how the technology and design of frigates changed during the Cold War, how the classes were modified to keep up to date, and explores the many varied missions they performed during the Cold War and since.
Format: Paperback
Pages: 48
Illustration: COLOUR SECTION(S)
Availability: Available. Usually dispatched 1-3 business days
Publisher: OSPREY
Publication date: 16/06/2021
Country of publication: UNITED KINGDOM
Weight: 0 g
Dimensions: 248.00mm X 184.00mm
Code: 60616