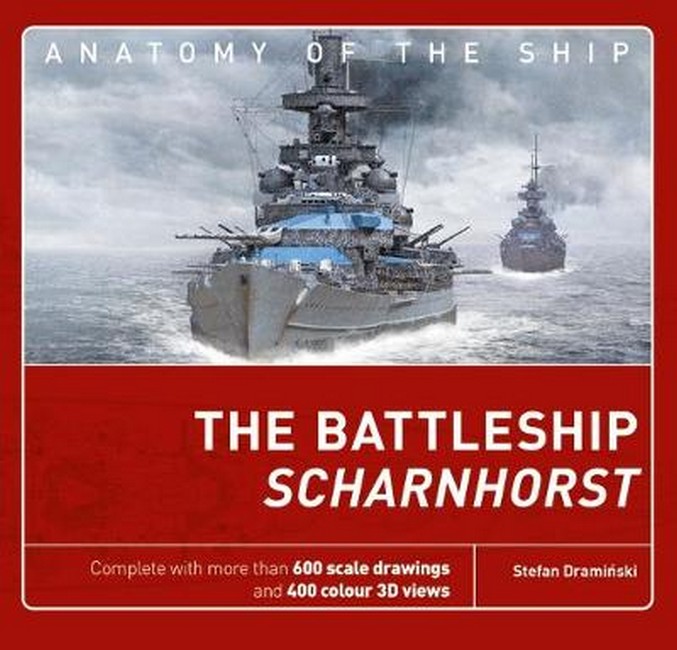 by Draminski, Stefan Code: 60202 Format: Hardback / 336 pages Publication date: 13/01/2021 Availability: Available. Usually dispatched 1-3 business days Price: AU $69.99
The Kriegsmarine's Scharnhorst was a German capital ship, described either as a battleship or battlecruiser, and the lead ship of her class, which included one other ship, Gneisenau. She was launched on 3 October 1936 and completed in January 1939, armed with nine 28cm C/34 guns in three triple turrets. She operated with Gneisenau for much of the early portion of World War II, including sorties into the Atlantic to raid British merchant shipping. They took part in Operation Weserubung (April-June 1940), the German invasion of Norway, during which they sank the aircraft carrier HMS Glorious and her escort destroyers Acasta and Ardent. Scharnhorst also sank HMS Rawalpindi in November 1939. In early 1943, Scharnhorst joined the Tirpitz in Norway to intercept Allied convoys to the Soviet Union. On a sortie from Norway to attack a convoy, the German force was intercepted by British ships and during the Battle of the North Cape (26 December 1943), HMS Duke of York and her escorts sank Scharnhorst. Most of her crew was lost. This is the most comprehensive examination of Scharnhorst ever published, drawing on new research and technology to tell the full story of the ship. It includes a complete set of detailed line drawings with fully descriptive keys and full-colour 3D artwork, supported by technical details, photographs, and text on the building of the ship, as well as a record of her service history.
Format: Hardback
Pages: 336
Illustration: COLOUR SECTION(S)
Availability: Available. Usually dispatched 1-3 business days
Publisher: OSPREY
Publication date: 13/01/2021
Country of publication: UNITED KINGDOM
Weight: 0 g
Dimensions: 240mm X 253mm
Code: 60202