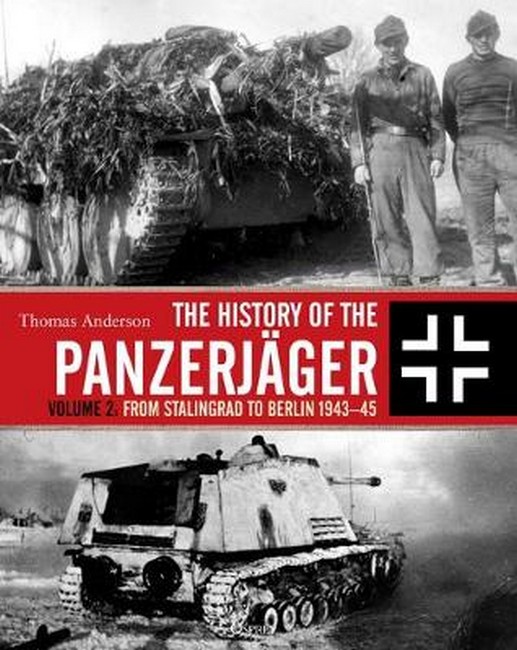 The History of the Panzerjager

Volume 2: From Stalingrad to Berlin 1943-45 by Anderson, Thomas Code: 58958 Format: Hardback / 304 pages Publication date: 18/11/2020 Availability: Available. Usually dispatched from UK 1-2 business days Price: AU $62.26
The German Panzerjager, or Panzerjagertruppe, was one of the most innovative fighting arms of World War II and its story has never properly been told, until now. Many books have focused on an element of the story - the Hetzer, Jagdpanzer, and Jagdpanther - but this two-volume series represents the first time that the whole history of the development and organization of Nazi Germany's anti-tank force has been revealed. This second volume takes up the story in the mid-war years and follows the development of the Panzerjager, describing the innovative new vehicles such as the Ferdinand, Elefant and Nashorn. German Armoured Fighting Vehicle specialist Thomas Anderson also analyses the key role it performed in the War in the Desert and across the Eastern Front, and ultimately in the defence of the Reich itself. Packed with previously unpublished wartime photographs, combat reports, and detailed charts and statistics, this book offers an unparalleled account of this unique arm of the Wehrmacht.
Format: Hardback
Pages: 304
Illustration: B&W THROUGHOUT
Availability: Available. Usually dispatched from UK 1-2 business days
Publisher: OSPREY
Publication date: 18/11/2020
Country of publication: UNITED KINGDOM
Weight: 0 g
Dimensions: 242mm X 190mm
Code: 58958