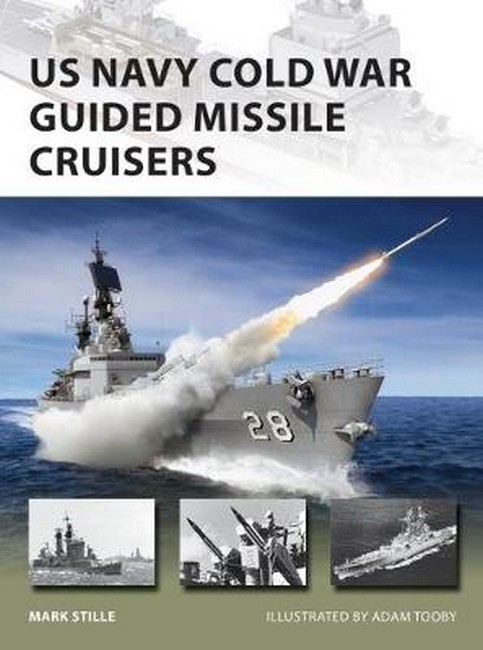 by Stille, Mark Code: 58207 Format: Paperback / 48 pages Publication date: 06/02/2020 Availability: In Stock. Usually dispatched same business day from Sydney, Australia Price: AU $24.99
Faced with an increasingly formidable anti-ship cruise missile threat from the Soviet Union in the early days of the Cold War, and with the recent memory of the kamikaze threat from World War II, the USN placed a great priority on developing air defence cruise missiles and getting them to sea to protect the fleet. The first of these missiles were sizable, necessitating large ships to carry them and their sensors, which resulted in the conversion of a mix of heavy and light cruisers. These ships, tasked with protecting carrier groups and acting as flagships, entered service from 1955 and served until 1980. The cruisers served in the front lines of the Cold War and many saw combat service, engaging in surface actions from Vietnam to the Persian Gulf. Complementing the conventionally-powered missile cruisers was a much smaller number of expensive nuclear-powered cruisers, including the Long Beach, the USN's largest-ever missile cruiser. Until replaced by the Ticonderoga and Burke classes of Aegis ships, the USN's 38 missile cruisers were the most capable and important surface combatants in the fleet and served all over the globe during the Cold War. Using specially commissioned artwork and meticulous research, this illustrated title explores the story of these cruisers in unparalleled detail, revealing the history behind their development and employment.
Format: Paperback
Pages: 48
Availability: In Stock. Usually dispatched same business day from Sydney, Australia
Publisher: OSPREY
Publication date: 06/02/2020
Country of publication: UNITED KINGDOM
Weight: 160 g
Dimensions: 248mm X 184mm
Code: 58207