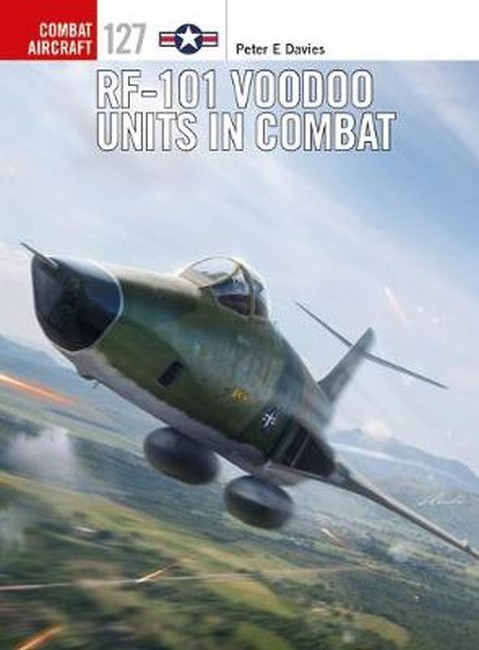 by Davies, Peter E. Code: 55209 Format: Paperback / 96 pages Publication date: 11/02/2019 Availability: Available. Usually dispatched 1-3 business days Price: AU $32.99
McDonnell's F-101 Voodoo series was in many ways the most interesting of the `Century Series' fighter programmes of the 1950s, partly because the type's design and intended mission changed radically during a 40-year career. Originally designed as a fighter-bomber, it was converted to be a reconnaissance aircraft, serving alongside the U-2 and RF-8 Crusaders during the Cuban Missile Crisis and the Vietnam War. Although it gained a reputation as a difficult aircraft to handle, the jet's supersonic speed and newly-developed camera suite enabled it to conduct vital low-altitude photo-reconnaissance missions over heavily-defended target areas. In combat, the RF 101 was usually `first in-last out' for strike missions. This made it a ready target, with a solo aircraft flying straight and level to gather target photo evidence at low-altitude offering enemy gunners plenty of opportunity to shoot the Voodoo down. This study tells the combat stories of this extraordinary aircraft, highlighting the difficulty of the missions on which it was sent and the courage of its pilots.
Format: Paperback
Pages: 96
Illustration: B&W THROUGHOUT
Availability: Available. Usually dispatched 1-3 business days
Publisher: OSPREY
Publication date: 11/02/2019
Country of publication: UNITED KINGDOM
Weight: 0 g
Dimensions: 248mm X 184mm
Code: 55209