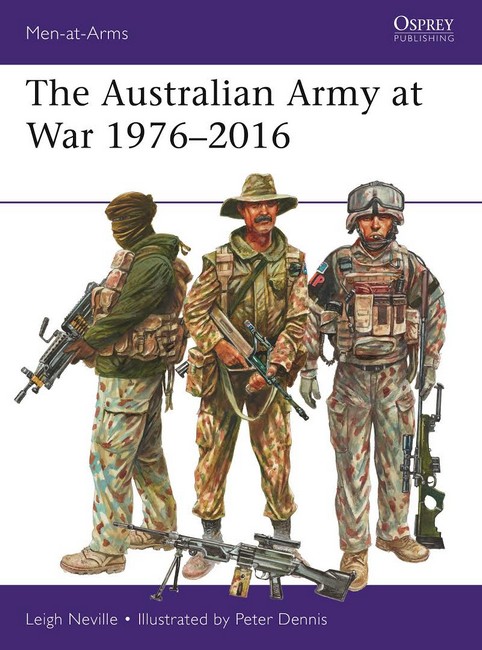 Since the end of their involvement in the Vietnam War, the Australian Army has been modernized in every respect. After peacekeeping duties in South-East Asia, Africa and the Middle East in the 1980s-90s, Diggers were sent to safeguard the newly independent East Timor from Indonesian harassment in 1999, and to provide long-term protection and mentoring since 2006. Australian Army units have served in the US-led wars in Iraq and Afghanistan, and Australian Special Forces are currently operating alongside US and British elements against ISIS in northern Iraq. During these campaigns the Australian SAS Regiment and Commandos have fully matured into Tier 1 assets, internationally recognized for their wide range of capabilities. The book, written by an Australian author who has written extensively about modern warfare, traces the development of the Armys organization, combat uniforms, load-bearing equipment, small arms and major weapon systems using specially commissioned artwork and photographs.

Leigh Neville is an Australian national who has written a number of books on both modern conventional military units and special operations forces serving in Afghanistan and Iraq, their weapons and their vehicles, including multiple titles for Osprey with several more in development. He has also consulted on military topics for several wargame companies and television documentary makers. He lives in Sydney with his wife and two dogs. Peter Dennis was born in 1950. Inspired by contemporary magazines such as Look and Learn he studied illustration at Liverpool Art College. Peter has since contributed to hundreds of books, predominantly on historical subjects, including many Osprey titles. A keen wargamer and model maker, he is based in Nottinghamshire, UK.