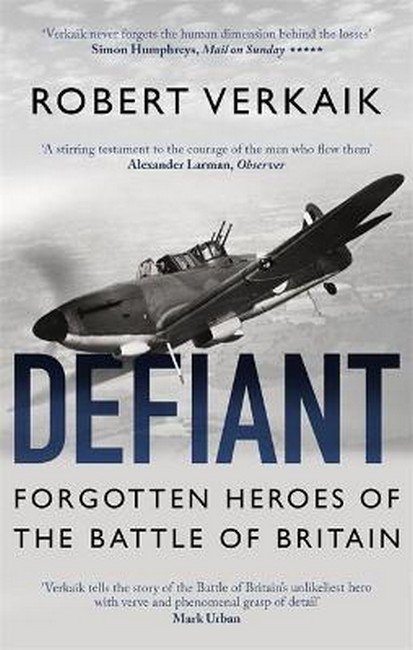 Robert Verkaik makes a revisionist case for an unsung aircraft, the Boulton Paul Defiant. This two-seat gun-turret fighter is, argues Verkaik, the forgotten fighter of Dunkirk and the Battle of Britain; the effectiveness as well as the courage of its crews is overlooked in standard accounts. To advance his case, he notes that a Defiant squadron still holds the record for the number of enemy aircraft shot down in a single day, with a claimed figure of 38

Robert Verkaik tells the story of the Battle of Britains unlikeliest hero with verve and phenomenal grasp of detail. He brings the Defiant fighter back into focus as an important part of the victorious RAF in the hour of its greatest trial

In this startling new perspective on the Battle of Britain, Robert Verkaik reveals the surprising truth about the battles forgotten fighter, the Boulton Paul Defiant.

The crucial role played by the Spitfire and the Hurricane has been exhaustively recorded, but, to date, next to nothing has been written about the third British fighter which took part in the battle. By writing from the unique perspective of the pilots who flew the Defiant and their air-gunners, Verkaik helps to set the record straight.

The Air Staff regarded the Defiant as a state-of-the-art bomber destroyer and wanted to equip a third of all Fighter Command squadrons with this new plane. But the head of Fighter Command, Hugh Dowding, had other ideas and went to war with Whitehall over its plan to saddle him with hundreds of obsolete turret fighters. Then at Dunkirk, a Defiant squadron scored a huge success against the Luftwaffe by shooting down more German planes in one day than any other RAF unit before or since. Fighter Command, enthusiastically urged on by the Air Ministry, now committed its third fighter to the coming air battle over southern England. In the desperate dogfights of the battle, Defiants shot down both German bombers and fighters but suffered heavy losses too - one squadron was almost wiped out when it was ambushed by a superior force of Messerschmitt 109s. On 30 August 1940 all Defiant squadrons were withdrawn from the front line.

The families of the Defiant air crews believed that their husbands, brothers and sons had died in vain, but the truth is that their vital contribution to the battle over Dunkirk and their role in the Battle of Britain has been all but erased from the official history. The story of the Defiant has not been allowed to mar the glorious victory won by the Spitfire and the Hurricane.

ROBERT VERKAIK is the former security editor of the Mail on Sunday who now writes for the Guardian, Independent, i, Tortoise, Observer, Times, Sunday Telegraph and Sunday Times. He is the author of Jihadi John: The Making of a Terrorist and Posh Boys: How English Public Schools Ruin Britain, published by Oneworld in 2016 and 2018. His reporting has been long-listed for both the Orwell Prize and the Paul Foot Awards. He was a runner-up in the specialist journalist category at the 2013 National Press Awards. Robert lives in Surrey.