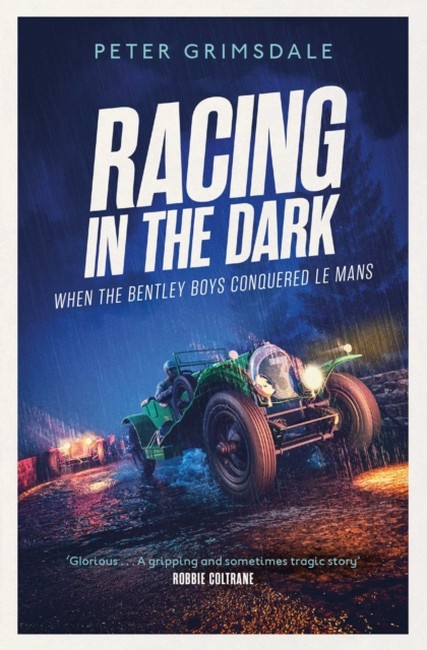 Racing in the Dark

Glorious...gripping and sometimes tragic Robbie Coltrane
The inspirational story of the Bentley Boys and Le Mans - the race they made their own.
Le Mans, 1927. W.O. Bentley peered into the dusk. His three cars, which had led from the start, were missing. Two years running he had failed to finish. Once again he was staring into a void. Racing, his shareholders told him, was a waste of money. This race looked like being his last.

W.Os engineering skills had been forged on the Great Northern railway and in the skies of the First World War, where Bentley-powered Sopwith Camels took the fight to Germanys Red Baron. Determined to build and race his own cars, he assembled a crack team from all strata of 1920s Britain, from East End boys Leslie Pennal and Wally Hassan to multi-millionaires Woolf Barnato and Tim Birkin, men in search of adventures to blaze their way out of the dark past.

They dedicated themselves to building the perfect road and racing car. In the hayloft above their workshop, the first Bentley was born and soon it was the car of choice for the fast-living upper classes. They raced at the fashionable Brooklands circuit and then set their sights on the fledgling 24 Hours Le Mans race. An audacious goal for a British car, yet the Bentley Boys rose to the challenge. But on that night in 1927, after the biggest crash in racing history claimed their cars, could they still pull it off and put British motor racing on the map?

In the 1920s, Bentley Motors burned brightly but all too briefly; yet its tale, filled with drama, tragedy, determination and glory still shines a century on.

Peter Grimsdale is a bestselling writer, TV producer and former commissioning editor whose credits stretch from Big Brother to Panorama, from The Adam & Joe Show to Finest Hour and Dispatches on Deepwater Horizon and Tony Blairs millions. His first motoring book was the critically acclaimed High Performance: When Britain Ruled the Roads. Racing in the Dark is his second book with Simon & Schuster.