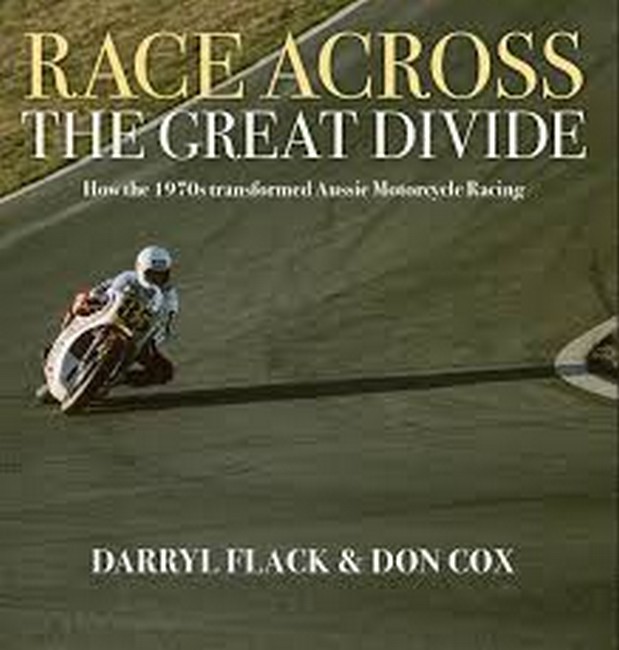 Race Across The Great Divide

The widely acclaimed Race Across The Great Divide explores why Australia became a crucible for some of the best riders in world championship motorcycle history, and how it created the world’s longest-running and most successful race category, Superbikes.

Authors Don Cox and Darryl Flack chronicle motorcyclings spread across Australias regions in the 1970s, and detail how the best of those new rural-bred riders raced across the Great Divide and onto the great circuits of the world.

The coffee table book is rich in vivid anecdotes and over 330 images, bringing to life the Easter Bathurst races, the Castrol Six-Hour, Laverton TT, New Zealands Marlboro Series and many races in between.

​The 1970s was the high-water mark for Australian motorcycle racing. It was the decade that eventually made grand prix team bosses look at Aussie riders as must-haves rather than could-haves. Race Across The Great Divide reveals what changed their minds.

The authors conducted dozens of interviews with  former racers to allow them to tell their stories, and set the record straight. Their revealing and vivid recollections provide the rolling narrative that embodies the spirit of this book.

Some of the eras best photographers rummaged through their archives to help illustrate and amplify those memories. Co-author Flack visited John Ford (right) at Glenbrook in the Blue Mountains to help sift through boxes of old proofs and prints, while younger brother Gary Ford thumbed through a stack of old race results, supp regs, final instructions and race programs that he collected during his time as a road racer for the Parramatta Club in the late 70s.

​The authors could not have completed this book without the kind co-operation and generosity of those ex-racers and photographers. Thank you  all. Another inspiration was playing 70s music at the start of each chapter to Tardis the authors back to that magic time. They would like to thank Jeff St John, Healing Force, Richard Clapton, The Angels and Cold Chisel for the trip.