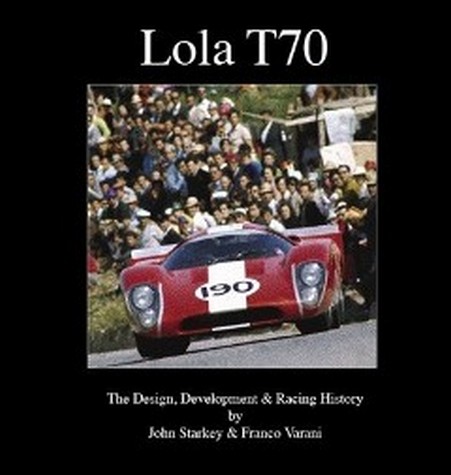 by John Starkey Code: 26006 Format: Hardback Publication date: 01/07/2012 Availability: Sold Out Price: AU $185.00
Rarely had there been a racecar quite as beautiful ad the Lola T70. It was the racing sportscar Eric Broadley so desperately wanted to design, after his association with the Ford Motor Company, whilst designing their GT40. On its introduction in 1965, the T70 was found to be beutiful in toher repects: the handling was highest order and whilst the brakes on MK. Is and IIs may have wilted when the car pushed very hard, they were seen as being quite sufficient for theit time. Indeed, in 1966, a T70 MK. II took John Surtees to the crown of being the first Champion of Can Am racing. With Mk. III came bigger brakes but, more importantly, 1967 also ushered in the glorious T70 Mk. III coupe, a Peter Jackson design par excellence. So good were the aerodynamics of both the Mk. III and IIIb coupe that Porsche copied the tail to transform that evil handling sow's ear, the 917, into a silk purse. Within the pages of this book, you can discover how the T70 came to be designed and developed, read about its illustrious racing career (almost complete domination on the National racing scene of the day), and read the history of every single one built in period. Today, T70s are venerated. It wasn't so long ago, thirty years perhaps that some of them were simply discarded as: "Worn out racing cars". To say that happens no longer is an understatement: they are highly sought after and today are as successful in historic vintage racing as they were in their day.
Format: Hardback
Availability: Sold Out
Publisher: CHATERS WHOLESALE
Publication date: 01/07/2012
Country of publication: UNITED KINGDOM
Weight: 2000 g
Dimensions: 200mm X 100mm
Code: 26006