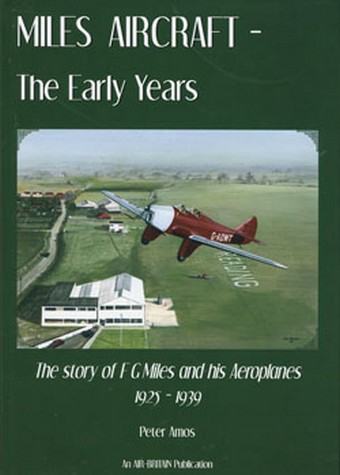 by Peter Amos Code: 23146 Format: Hardback / 448 pages Publication date: 01/01/2000 Availability: Available. Usually dispatched from UK 1-2 business days Price: AU $134.95
Publisher's notes: The story of Miles Aircraft really started at Shoreham in 1925 when FG Miles, the son of a local laundry owner, decided that his future should be in aviation. Before he even learned to fly, he designed and built his first aeroplane and then, when Avro at Hamble closed down, he purchased a number of airframes, including an Avro Baby, which he used as a basis to create the sporty aerobatic Southern Martlet. Personal matters intervened soon after when he fell in love with Blossom, the wife of one of his fellow directors. This led to a sudden exile to South Africa but upon his speedy return, they got married and thus was formed one of the most famous husband and wife aeronautical partnerships, with Blossom developing into an aircraft designer in her own right. Their first project was the Miles Satyr, an aerobatic biplane, before discussions with Charles Powis led to them joining Phillips & Powis Aircraft at Woodley and producing the highly successful Miles Hawk series of monoplanes. This partnership evolved into one of the most outstanding and radical firms of aircraft designers and manufacturers of the 1930s and 40s, until internal forces beyond their control brought about the company's demise in late 1947, This book is the start of the story of Miles from the initial barnstorming days at Shoreham to the aircraft producing years at Woodley in the period leading up to the Second World War. It tells of the aircraft companies with which he was involved and the detailed development history of all of the aircraft types and projects designed by him, his wife, and his brother George. The story is supported by a fully comprehensive history of each individual aircraft built.
Format: Hardback
Pages: 448
Illustration: COLOUR THROUGHOUT
Availability: Available. Usually dispatched from UK 1-2 business days
Publisher: AIR-BRITAIN (HISTORIANS)
Publication date: 01/01/2000
Country of publication: UNITED KINGDOM
Weight: 2136 g
Dimensions: 210mm X 300mm
Code: 23146