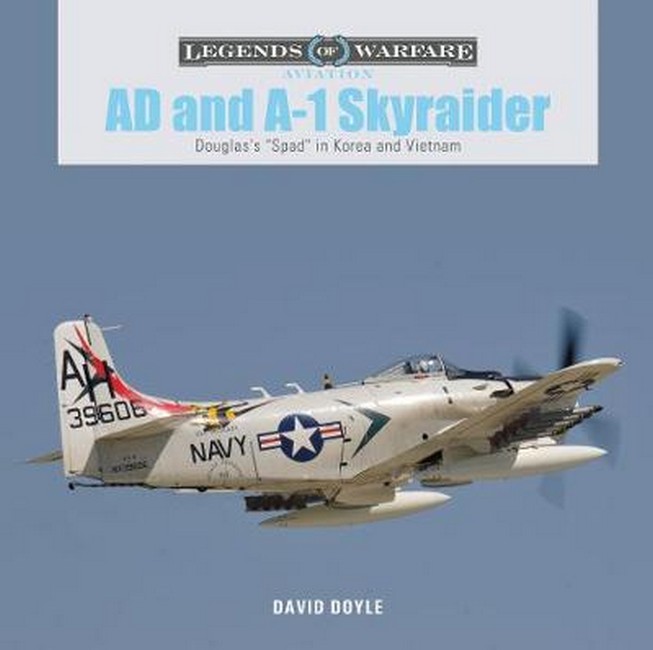 AD and A-1 Skyraider

Douglas's "Spad" in Korea and Vietnam by Doyle, David Code: 60298 Format: Hardback / 112 pages Publication date: 01/05/2021 Availability: Available. Usually dispatched 1-2 business days Price: AU $29.99
Design work on the Skyraider began at the behest of the US Navy late in WWII. Production began in 1946, and the type made its combat debut in the hands of naval aviators during the Korean War. In the following years, the rugged airframe and powerful engine meant that the type could be adapted into ever-expanding roles of attack, reconnaissance, weather, and electronic-countermeasure types. Though regarded by many as obsolete, in Vietnam the Skyraider again saw combat, now in the hands of not only US Navy and Marine pilots, but also USAF and Republic of Vietnam airmen. Capable of flying low and slow while armed with a massive array of ordnance, the Skyraider not only took on the role of attack aircraft but was also used as air cover for troops on the ground. Its impressive payload earned it the nickname of the "flying dump truck," while its reliance on a massive radial engine in an otherwise jet age caused others to refer to the Skyraider as the "Spad," in homage to the WWI fighter. AUTHOR: The aviation books by David Doyle, author of over 125 books, are noted for their thorough coverage of historic aircraft and his celebrated ability to locate scarce vintage imagery. SELLING POINTS: History of the Douglas Skyraider from the XBT2D during WWII through its use in Korea and Vietnam Begins with the experimental XBTD-1 and chronicles the design evolution, modification, and use of the AD (later A-1) Illustrated with rare archival photographs, including previously unpublished images 189 colour and b/w photographs
Format: Hardback
Pages: 112
Illustration: COLOUR SECTION(S)
Availability: Available. Usually dispatched 1-2 business days
Publisher: SCHIFFER PUBLISHING LTD
Publication date: 01/05/2021
Country of publication: UNITED STATES
Weight: 0 g
Dimensions: 229.00mm X 229.00mm
Code: 60298