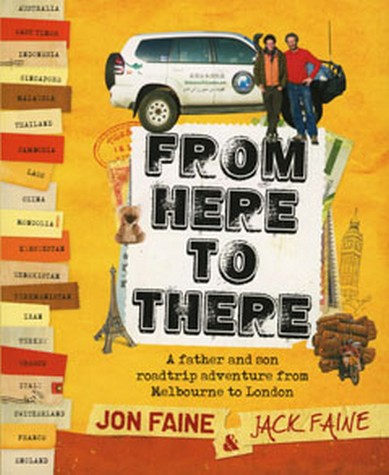 by Jack Faine Code: 23122 Format: Paperback / 352 pages Publication date: 01/07/2010 Availability: Available. Usually dispatched 1-3 business days Price: AU $42.95
Somehow, I convinced myself it was a good idea. Somehow, I convinced myself that it was do-able. Now I shake my head... We drove through the Gobi desert in Mongolia in a snowstorm, avoided an Iranian sedan doing cartwheels on the freeway near Tehran, wove around the shores of the Caspian Sea and navigated the desert in Turkmenistan. We learned to say thank you in thirty languages and dispensed fluffy koalas to traumatised small children in obscure mountain pockets from Laos to Kurdistan. We kicked an Aussie Rules footy across borders and taught customs officers how to do a drop-punt from Timor Leste to Uzbekistan. We ate bark and ox blood and worms and pigs ears and eel and curries so hot we nearly fell off our chairs. We bribed police in five countries, ignored parking tickets in another six and got lost pretty much everywhere. We squabbled over food and farting, snoring and sneezing. It was total folly and it was the best thing you can ever do. I would do it again and I would not recommend it to anyone.' In April 2008, Jon Faine and his son Jack closed their door on their Melbourne home and leaving jobs, studies, family and friends, took six months and went overland to London in their trusty 4-wheel-drive. This intelligent and funny recount of the countries they visited, people they met and trouble they got into, is also the story of a tender father-son relationship.
Format: Paperback
Pages: 352
Availability: Available. Usually dispatched 1-3 business days
Publisher: HARPER COLLINS PUBLISHERS
Publication date: 01/07/2010
Country of publication: AUSTRALIA
Weight: 876 g
Dimensions: 220mm X 179mm
Code: 23122