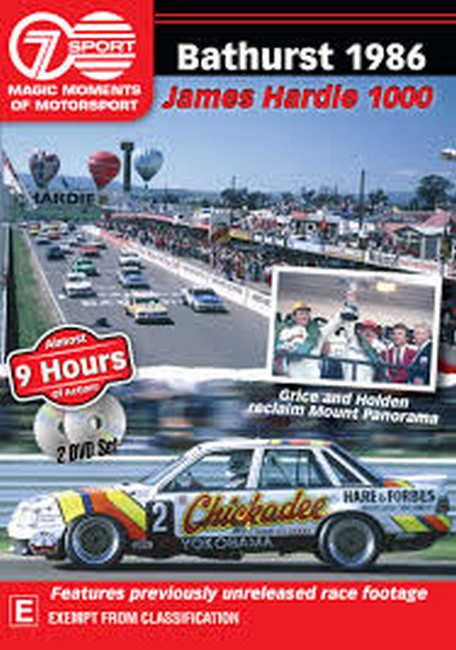 For the very first time, the full Seven Sport telecast of the ’86 race has been released here as part of the popular Seven Sport’s Magic Moments of Motorsport DVD series.

The 1986 race saw the second year of Group A international touring car regulations at Bathurst with an evolution specification Commodore to defend Holden’s honour at the Mountain.

The hordes of V8 Commodores included a Mobil Holden Dealer Team entry for ‘dream team’ Peter Brock and Allan Moffat, but the level of competition in the 59-car field was simply stunning.

Nissan returned to Bathurst (after missing the 1985 race) with a pair of turbocharged Skylines and a driving line-up that included a very young Glenn Seton; the factory JPS BMW team was again headed by Jim Richards and John Bowe was the main driver for the factory-backed Volvo Dealer Team in the wake of ’86 Australian Touring Car Champion Robbie Francevic departing the team pre-Bathurst.

Included on this release is the full race day telecast, including the pre-race festivities, a Nissan Pulsar support race and then the ‘main course’, the 163-lap Mountain classic.