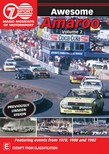 SUCH was the response to the first ‘Awesome Amaroo’ DVD in the Seven Sport Magic Moments of Motorsport series that we’ve come up with even more gold from the sadly defunct Sydney circuit to include on volume two!

The 1.9-kilometre Annangrove layout was popular with drivers and fans alike given its undulation and mixture of corners all compacted into a small precinct.

Amaroo Park still lives on in the hearts and minds of Australian race fans across the country despite closing in 1998 and on this special DVD release we have included some amazing vision for you to enjoy.

Salvaged from old Umatic videotapes that were previously thought to be unsalvageable, we’ve saved some really rare material that will no doubt keep you glued to your screen!

First up we have saved the 1978 Better Brakes 10,000 touring car event that was something of a forerunner to the popular AMSCAR touring car series. It includes the mighty Ford hardtops of Allan Moffat, Colin Bond, Dick Johnson and John Goss up against Torana superstars Allan Grice, Bob Morris and a horde of Holden privateers.

The touring car stars compete in a three-race program with plenty of action - a collision on the first lap of one of the races between Moffat and Morris must be seen to be believed!

We’ve got the full 155-lap race from August 1980 included on this release and to finish off things we also have included the opening round of the 1982 CRC Better Brakes AMSCAR touring car series featuring Brock, Alan Jones (in a Chevrolet Camaro no less!), Kevin Bartlett, Grice, Moffat and many more.