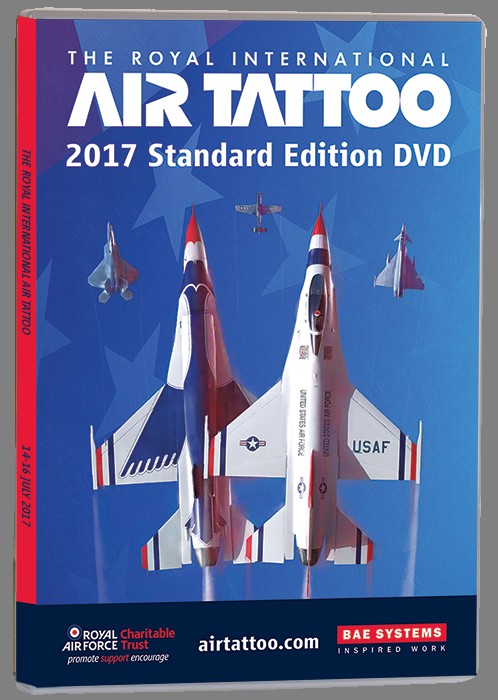 This two-disc, six-hour collector’s edition of the official souvenir DVD / Blu-ray is a superb way to re-live all the action from The Royal International Air Tattoo 2017.

A series of spectacular flypasts and jaw-dropping displays ensured the USAFs 70th anniversary was celebrated in style at the world famous airshow. The two-hour main feature includes displays by the F-22 Raptor and the USAF Thunderbirds plus a special formation flypast with the Red Arrows. You’ll also be able to enjoy the surprise appearance of a stealth B-2 Spirit bomber.

Other highlights include the UK display debut of the French Air Forces Couteau Delta team flying two Mirage 2000D fighter aircraft; the Midnight Hawks display team from Finland and Sukhoi Su-27 Flanker from the Ukrainian Air Force. In-cockpit cameras give dramatic views of the action during many of the displays an two soundtracks allow you to choose between listening to the commentary or just hearing the aircraft sounds throughout the programme.

Special Features. Disc One includes a further 100 minutes with arrivals and departures, an extended feature on the United States Air Force 70th anniversary, a closer look at the Thunderbirds’ visit and a talk through his display from Belgian Air Force F-16 Solo Display Pilot Tom De Moortel.

Disc Two has another 2 hours of action including the remaining arrivals and departures, and extended in-cockpit features giving a sense of the full routines on board 8 displays including Couteau Delta, Patrouille Suisse, CV-22B Osprey, Midnight Hawks and A400M.