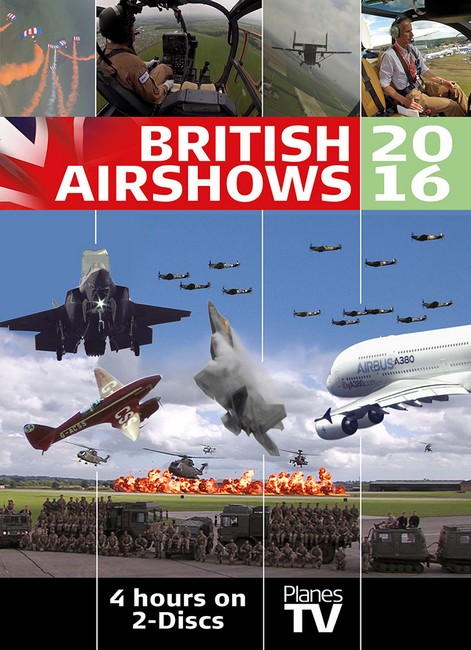 Hundreds of thousands of people followed PlanesTV’s live online broadcasts from 2016 airshows, in this 2-disc programme we bring you the highlights of each of them.

2016 became the year of the United Kingdom’s latest frontline jet, the F-35B Lightning II.  It gave an impressive role demonstration at the Royal International Air Tattoo. The Air Tattoo also gave us an awesome site of the extraordinary manoeuvrability of the F-22 Raptor.

At Farnborough we got glimpses of two aeroplanes we haven’t seen much of lately -  the gorgeous de Havilland DH88 Comet, and the not-quite-so-gorgeous, but still fascinating Edgeley Optica.
Torbay was a new show on the calendar, and made for a superb setting for airshow regulars such as the Breitling Wingwalkers and the Yakovlevs.

This British Airshows title has always delivered a spectacular variety of the best displays, and this year features eleven events:

Disc two is packed with two hours of fantastic in-cockpit action from over twenty displays, including: