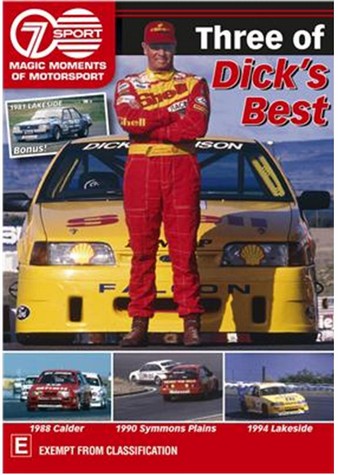 by Chevron Code: 36051 Format: DVD Publication date: 01/01/2015 Availability: Available. Usually dispatched 1-3 business days Price: AU $42.95
Sitting among a very select club of five-time Australian Touring Car Champions, Dick Johnson is a legend of Australian motorsport. For the first time, Chevron has dug deep into the Seven Sport archive and released three of the Ford legend’s victorious races from a memorable era of ATCC racing in the 1980s and 1990s. We begin in the Group A era with the opening round of the 1988 ATCC at Calder in Melbourne as Johnson claimed victory in a turbo Sierra. The same weekend saw the debut of a partnership with John Bowe that would last an incredible 11 years. Next we fast-forward to Round 2 of 1990 at Symmons Plains in Tasmania as Johnson tackled old adversary Peter Brock and a horde of fellow Sierra drivers including Bowe, Glenn Seton and Colin Bond. To round out, we move into the five-litre V8 era with Johnson’s popular win on home soil in Race 1 at Lakeside in 1994. As a bonus extra we’ve also turned up some rare vision of the race that bagged Johnson his first ATCC crown at Lakeside in 1981. This is a release all Dick Johnson, Ford and Australian motorsport fans must add to their collection.
Format: DVD
Availability: Available. Usually dispatched 1-3 business days
Publisher:
Publication date: 01/01/2015
Country of publication: AUSTRALIA
Weight: 200 g
Dimensions: 150mm X 150mm
Code: 36051