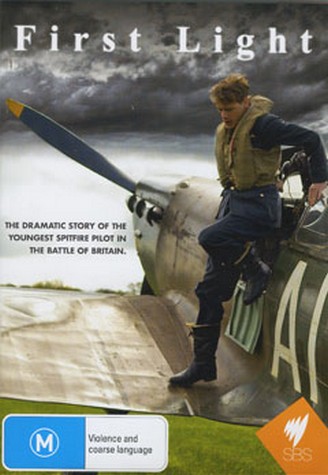 First Light DVD - The Story of the Youngest Spitfire Pillot

by SBS Code: 24060 Format: DVD / 78 mins Publication date: 01/07/2010 Availability: Available. Usually dispatched 1-2 business days Price: AU $33.95
Producer's notes: The dramatic story of the youngest Spitfire pilot in the Battle of Britain Geoffrey Wellum was just 18 when he was thrown into combat as a fighter pilot at the beginning of the terrifying air war of the Battle of Britain. Now seventy years on and aged 89, he is still haunted by the conflict that almost destroyed him. Based on Geoffrey's personal and deeply moving memoirs, First Light is an intimate drama-documentary that delivers a compelling testimony of his wartime experiences, revisiting the stark emotions and fiery action that dazzled and terrified him as a young man and which changed his life forever. It is the story of a boy who went to war, and who came back a broken man. Set in the summer of May 1940, Geoffrey 'Boy' Wellum (Sam Heughan), driven by his love of flight and a desire to defend his country – joins the RAF's most famous "fighter boys": No.92 Squadron. Barely out of school and with just a few hours flight training, he has never seen a Spitfire close up, let alone flown one. But no one has time to teach Boy the art of war, the squadron is fighting for survival and he must find his own way through the tension on the ground and the fight he must soon join in the air. As he is plunged head-first into combat, he discovers that the real enemy is not the Luftwaffe but the forces of despair that threaten to overwhelm him. As the death toll rises, Boy withdraws into himself and pushes away those who care for him, even Grace (Tuppence Middleton), the love of his life, cannot save him from the darkness that fills his heart. Thrown time and again into a vortex of terrifying noise, stark emotions and fiery combat, Boy – like those around him – reaches breaking point. After 18 months on the front line he is a boy who has lost his youth in the most violent and immediate way possible; his spirit broken by a merciless world of kill or be killed. No longer caring whether he lives or dies, he can only be saved by the action of his superiors – who know that if he continues to fly he will face certain death. Through Geoffrey Wellum's compelling first person testimony, intense drama and cutting-edge CGI and real-time Spitfire flying sequences, First Light evokes both a period of great personal sacrifice and the claustrophobic horror of the fighter pilot's cockpit – where terror lurked in every cloud.
Format: DVD
Availability: Available. Usually dispatched 1-2 business days
Publisher: MADMAN ENTERTAINMENT
Publication date: 01/07/2010
Country of publication: AUSTRALIA
Weight: 88 g
Dimensions: 0mm X 0mm
Code: 24060