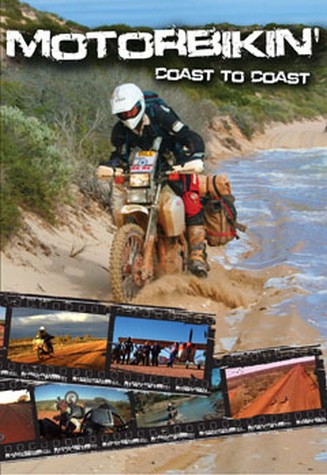 by Phil Hodgens Code: 23524 Format: DVD / 90 mins Publication date: 01/07/2010 Availability: In Stock. Usually dispatched same business day from Sydney, Australia Price: AU $17.95 (was AU $29.95) You save AU $12.00
Producer's notes: The Motorbikin' boys are back as Phil and Bill take a shot at the four and a half day record coast to coast across Oz... They gave it a go back in 2008 on KTM 950 SE's but DNFed after melting their tyres at high speed midway at The Rock. They were down but not out and this year (2010) they returned on big tanked DR 650s leaving Byron Bay (Australia's most easterly point) and heading for Steep Point WA, (Australia's most westerly point) via the Simpson Desert and The Gunbarrel. The adventure that unfolded was captured on multiple cameras, including amazing aerial footage shot by Dick and Easo who tailed them in a light plane. Featuring roo strikes in western Queensland, flooding at Birdsville, a crossing of the Simpson in a day and the bone jarring corrugations of The Gunbarrel. See the Simpson and the flooded Red Centre as you've never seen it before in this non stop adrenaline fueled transcontinental blast. The new DVD also features their previous attempt on KTM 950 Super Enduro's from 2008, the Sidetrack story that started it all and much more. Also includes the route GPX file you can upload from the DVD to a GPS mapping program. ***WARNING: occasional coarse language***
Format: DVD
Availability: In Stock. Usually dispatched same business day from Sydney, Australia
Publisher: MOTORBIKIN
Publication date: 01/07/2010
Country of publication: AUSTRALIA
Weight: 88 g
Dimensions: 150mm X 150mm
Code: 23524