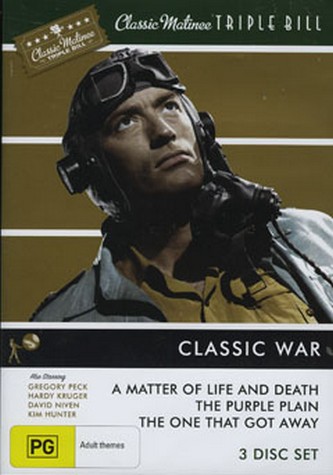 by Beyond Home Entertainment Code: 23273 Format: DVD / 315 mins Publication date: 01/01/2000 Availability: Sold Out Price: AU $19.95
Producer's notes: Close the doors, dim the lights, take a seat and leave your troubles behind. The Classic Matinee Triple Bill is your exclusive gold pass to the Matinee Era - A time of quality, style and sophistication. A MATTER OF LIFE AN DEATH - 1946 Starring David Niven and Kim Hunter Squadron Leader Peter Carter is alone in a blazing plane. As he prepares himself for death he confides his innermost secrets to a radio operator. He survives and later meets the woman he spoke to and they fal1 in love. During a brain operation, he meets characters from another world, and his spirit is put on trial. The verdict will decide whether he will live or die. THE PURPLE PLAIN - 1954 Starring Gregory Peck and Brenda de Banzie Squadron Commander Forrester is on a transport flight when his plane crashes. He and his passenger, Blore, attempt to trek through the jungle to safety with their injured navigator. Forrester is stern and hard after the loss of his wife earlier in the war, but his heart is softened by the kindness of a beautiful Burmese girl. THE ONE THAT GOT AWAY – 1957 Starring Hardy Kruger and Colin Gordon This is the dramatic true story of Franz Von Werra, the only German prisoner-of-war in Britain to escape and return to his homeland. During the Battle of Britain, his plane is hit and it plunges down onto British soil. Even though the pilot is captured, he is extremely confident and focused on his plan: to escape and return home against all the odds.
Format: DVD
Availability: Sold Out
Publisher: BEYOND HOME ENTERTAINMENT
Publication date: 01/01/2000
Country of publication: AUSTRALIA
Weight: 138 g
Dimensions: 150mm X 100mm
Code: 23273