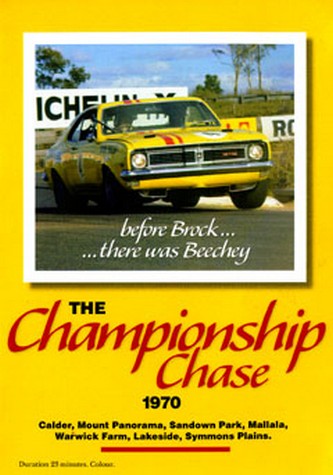 by Bloodwood Gully Code: 17910 Format: DVD / 23 mins Publication date: 01/07/2006 Availability: In Stock. Usually dispatched same business day from Sydney, Australia Price: AU $25.00 (was AU $39.95) You save AU $14.95
Producer's notes: The foundation stone of today's V8 Supercars was laid in 1970, when Norm Beechey won the Australian Touring Car Championship in a Shell-sponsored Holden Monaro. This video is the story of that dramatic, significant year. It was the first time an Australian-made V8 had won the title, which until then had been dominated by cars like the Ford Mustang and Chevrolet Camaro. The Holden Monaro Beechey started with was a 327, which was to prove unreliable. He moved to a 350 for 1970 — which had enough grunt to beat the Mustangs, winning three of the seven rounds and finishing second in one of them to take the title. Norm Beechey was the first crowd hero in Australian motor sport, a spectacular driver who sometimes fitted inferior tyres in practice so as to make more smoke. At the end of a race meeting he would sit for hours on the bonnet of his car, happily talking to adoring fans and signing autographs. He was as huge an icon as Peter Brock would later become. However, after 20 years in racing, this highly-successful businessman wanted to spend more time with his family. After winning the championship round in Perth in September 1972 he donated his winnings to charity, flew back to Melbourne, sold the Monaro, his transporter and all the spares, and chopped his racing helmet in half with an axe. Bill Tuckey
Format: DVD
Availability: In Stock. Usually dispatched same business day from Sydney, Australia
Publisher: GAIL ADAM
Publication date: 01/07/2006
Country of publication: AUSTRALIA
Weight: 76 g
Dimensions: 150mm X 100mm
Code: 17910