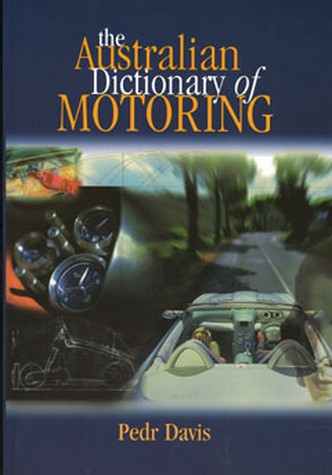 The Australian Dictionary of Motoring

by Pedr Davis Code: 11025 Format: Paperback Publication date: 01/07/2001 Availability: Available. Usually dispatched 1-3 business days Price: AU $69.95
Do you know what a 'chuggle' or 'cinicity' is? Who goes "twocking"? Who won the 2001 Australian Grand Prix? How did the terms "pole position" and "lemon" originate? The answer to these questions and just about anything else you may want to know about any automotive subject can be found in The Australian Dictionary of Motoring. A fully updated version of the acclaimed Macquarie Dictionary of Motoring, this excellent reference features over 440,000 words and nearly 600 illustrations. It covers component descriptions, new technology, motor sport events (inc. results), industry terms, styling phrases, Australian car makers, marque histories and much more. Virtually all motoring expressions are there, including jargon, obsolete terms and slang, along with the specialised expressions used in motor sport, the automotive trades and car factories. Eminently browsable, this tome features entries ranging from the pioneer journeys that conquered Australia to a description of how in-car satellite navigation works. Compiled by well known and respected Australian engineer and motoring journalist Pedr Davis, this 464 page, large format book would be a very useful reference work for any motoring enthusiast. PS: "Chuggle" is a word coined by engineers to describe an engine with a bad surge caused by combustion instability. "Cinicity" is a characteristic of a tyre that tends to pull to one side because of an improperly constructed carcass. "Twocking" is UK slang for car stealing. The 2001 Australian Grand Prix was won by Michael Schumacher for Ferrari. One theory about "pole position" is that, in early French grands prix, the fastest qualifying time gained the best postion on the grid and received a case of Pol Roger champagne. It initially became known as the Pol position. The expression "lemon" has two possible origins. The Europeans attribute it to the 1934 Citroen Traction Avant, which gave so much trouble it was referred to as "citron" (French for lemon) instead of Citroen. The US version traces the name back to aone C.L. Womphopper (really!), reputed to have invented trade-ins, time-payments and repossessions. This big-time wagon salesman once bought a number of badly made wagons and sold them by offereing a free bushel of lemons with each one. How did you go?
Format: Paperback
Illustration: B&W THROUGHOUT
Availability: Available. Usually dispatched 1-3 business days
Publisher: HAYNES PUBLISHING GROUP
Publication date: 01/07/2001
Country of publication: UNITED KINGDOM
Weight: 1193 g
Dimensions: 0mm X 0mm
Code: 11025